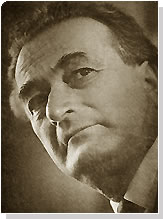 (1907-1991) Born in Izmir and attending the Union and Progress School, Ahmet Adnan Saygun took his first piano lessons from Ismail Zühtü Kusçuoglu. In 1920 he studied with Rosatti, and in 1922, with Macar Tevfik Bey. He studied for a short time with Saadettin Arel in 1923 and then taught himself counterpoint. In 1928, passing an examination given by the Ankara Music Teachers' College, he became a teacher at Izmir High School. During the same year, he was sent to the Schola Cantorum in France, where he studied under Vincent D'Indy and Eugéne Borrel. In1931, he began teaching counterpoint at the Ankara Music Teachers' College, and directed the Philharmonic Orchestra of the Prime Ministry in 1934. In 1936, he became an instructor at the Istanbul Municipal Conservatory, and during the same year, went to Anatolia with Béla Bartok to study and collect folk music. In 1939, he was appointed inspector of the Halkevleri (Houses of the People), and in 1947, was chosen for membership in the managing committee of the International Folk Music Council. Receiving the titles of "state artist" in 1971 and "artist professor" in 1985, Saygun also was awarded the Officier l'Académie medal of the French Government in 1951, the Janacek Medal from Czechoslovakia in1979, and the High Awards for Culture and Art in 1984. In 1934, on the occasion of a visit by the Shah of Iran to Turkey, Atatürk commissioned an opera, the theme of which was to be the historical and cultural ties between the two countries. Saygun thus composed Turkey's first national opera, "Özsoy," on a libretto by Adnan Saygun and Münir Hayri Egeli. Devoting himself to ethnomusicological endeavors from 1931 on, Saygun is the best-known of the "Turkish Five" abroad. Among his valuable contributions to Turkish ethnomusicology are his works on music of the Black Sea region, the relationship between Turkish and Hungarian folk music, and children's game and tongue twisters. Some of his works include: Özsoy (1934), Tasbebek (1934), Kerem (1934), Divertimento (1930), Yunus Emre Oratoryosu (1946), 1. Senfoni (1st symhonhy, 1953), Inci'nin Kitabi (Inci's book, 1960), a book, "Türk Halk Musikisinde Pentatonizm" (Pentatonism in Turkish folk music, 1935), Rize, Artvin ve Kars Havalisi Türkü, Saz ve Oyunlari Hakkinda Bazi Mâlumat (Some information on the folk songs, instruments and dances in the vicinities of Rize, Artvin and Kars, 1937), Toplu Solfej-2 cilt (Collective solfege - volume II, 1967-68), and abroad "Béla Bartok's Folk Music Research in Turkey" (1976).