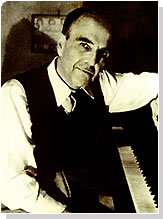 (1904-1985) Cemal Resit Rey was born in Jerusalem on September 25, 1904. His father was governor of Jerusalem, and was one of the writers taking part in the "Edebiyat-i Cedide" (new literature) trend. After the Babiali Raid, Rey and his family were forced to settle in Paris, where he began his musical education at the Paris Conservatory. Here, he studied piano with the famous pianist Marguerite Long. Forced to leave Paris by WWI, he continued his education at the Geneva Conservatory. In 1919, he returned to Paris, where he continued with Madame Long, as well as beginning thestudy of composition and aesthetics of music with Gabriel Fauré, and conducting with Henri Defosse. In 1932, he was appointed to the Istanbul Conservatory as a piano and composition instructor.

Chosen for membership in the International Union of Composers in 1926, Rey went on in 1943 to found the first string orchestra in Istanbul. He directed this ensemble, which in 1945 became the City Orchestra, and later took the name Istanbul State Symphony Orchestra, until 1970. One of the pioneering founders of the Philharmonic association in Istanbul in 1946, Rey also served as director of and consultant to the Ankara and Istanbul Radios from 1938-1949. In 1985, the year of his death, He was appointed "artist professor" at the Mimar Sinan University State Conservatory. Rey's compositions were influenced at first by impressionism, and later by westernized forms of Turkish folk music and even by mystic and Divan music. Some of his works include: 12 Anadolu Türküsü (12 Anatolian folk songs,1925), Enstantaneler (1931), Symphonic Poem; Karagöz (1930), Opera; "Cem Sultan" (1923), Zeybek (1926), Çelebi (1943), Musical Play; Lüküs Hayat (1933), Deli-Dolu (1934), 1st Symphony (1941), Piyano Concerto (1946) and Variations on an Old Istanbul Folk Song (Kâtibim) (1961).