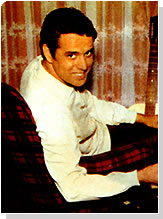 Erol Büyükburç was born in Adana in 1936. He made his stage debut at the Caddebostan Gazino in 1954, accompanied by the "Ismet Siral Orchestra." Büyükburç brought several innovations to our musical world, among which was the first composition in türkü form, and the introduction of folk instruments into the pop orchestra (1961). In 1960, he was chosen as Artist of the Year by the press, and maintained his position for years.

In 1964, 65 and 66, he received first prise at the Balkan Music Festival as soloist with our National Orchestra. He made eight 78s, sixty 45's, four LPs and 11 cassettes, and composed over 700 songs. One of his songs, "Altin Tasta Üzüm Var" (Grapes in a golden bowl) is still sung today.