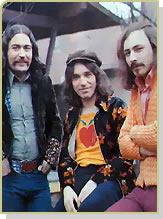 In 1967, five young musicians, unsatisfied with the music of the groups they were playing with, decided to start a new group, which they called "Mogollar" (The Moguls). Their first 45, "Eastern Love / Artik Çok Geç (It′s too late now)," came out in February 1968. In 1969 they went on a tour that covered nearly all of Turkey, and their experiences on this tour brought about important changes in their music. Their arrangements of Turkish folk songs and use of folk musical instruments gained them much attention. They gave a name to this new style: Anadolu Pop (Anatolia Pop). The Mogollar thus went down in history with the first Anatodolu Pop hit, "Dag ve Çocuk" (Mountain and Child).