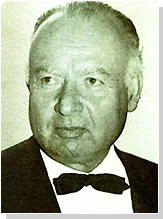 (1908-1999) The youngest of the "Turkish Five," Necil Kazim Akses was born in Istanbul. He studied harmony at the Conservatory with Cemal Resit Rey. After graduating from high school in 1926, he continued at the Vienna State Academy of Music and the Visual Arts, where he studied harmony and counterpoint and fugue under Joseph Marx, and violin with Kleincke. In 1932, he studied in the upper division of Prague State Conservatory with Josef Suk, and graduating in 1934, was appointed instructor at the Ankara Music Teachers' College. In 1935, he participated with Paul Hindemith, who had come to Turkey, in the founding of the Ankara State Conservatory, and in 1948, was appointed director of this institution. He served as a cultural attaché in Bern and Bonn. Appointed general director of the State Opera in 1958, Akses was recognized in 1971 as a "state artist." After his retirement, he taught composition at the State Conservatory. Necil Kazim Akses made use of Turkish folk and classical music motifs in his compositions. With his closeness to Dîvan music, he composed works such as his "Concerto," "Scherzo on Itrî's Nevâ-kâr," and "Gazel from a Dîvan." Some of his other compositions include two operas, "Mete" (1933) and "Bayönder" (1934), four symphonies, "Poem for Cello and Orchestra" (1930), "Four Pieces for Three String Instruments" (1946-72-79) and his symphonic poem "Peace and War" (1981) written in memory of Atatürk.