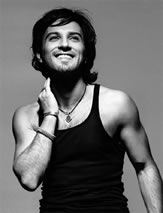 TARKAN was born in Germany on September 17, 1972. His family returned to Turkey when he was 14 years old. His interest in music, encouraged him to study Turkish art music. He attended the Üsküdar Music Society from 1990–92. His first album “Yine Sensiz” (With you again) was released in 1993. In his second album “Şıkıdım,” he worked with Sezen Aksu. Tarkan gave 74 concerts in Turkey and Europe with his song “A acayipsin” (Oh, your’e strange). In New York, where he took language education, he met Ahmet Ertegün and began to work on new projects with Atlantic Records. Tarkan, known as "Prince of Pop," has been introducing Turkish pop music to the world.